Okay, this stuff is my new obsession!!  Don’t know what tempeh is?  Let me help you out…

Tempeh is a traditional soy product originally from Indonesia. It is made by a natural culturing and controlled fermentation process that binds soybeans into a cake form, similar to a very firm vegetarian burger patty.

Sounds weird, right?  Well, it’s not.  It’s a great source of protein, and it happens to be super good for you, and it’s packed with nutrients.  Don’t believe me?  Google, my friends.

I’ve made it 3 ways and have consumed ALL of them and love them equally.  It all depends on what you’re in the mood for.  But, I’m telling you if you fed this to your children or a friend that’s anti-vegetarian, you would change some minds.  It just depends on what you’re craving, but I have one maple glazed, and two Asian inspired tempeh dishes.  Seriously, this stuff is TDF.  (To Die For.)  I made that up.  You’re welcome.  Let’s start at the top….

The key to this one is in marinating the tempeh AND the “gravy” on top.  Simply delish!!  This would be a fabulous marinade/glaze for chicken as well.  I found this recipe on Meghan Telpner’s blog, but I made a few changes, but this was SO SO SO good!!

Getting the Marinade Ready
DIRECTIONS 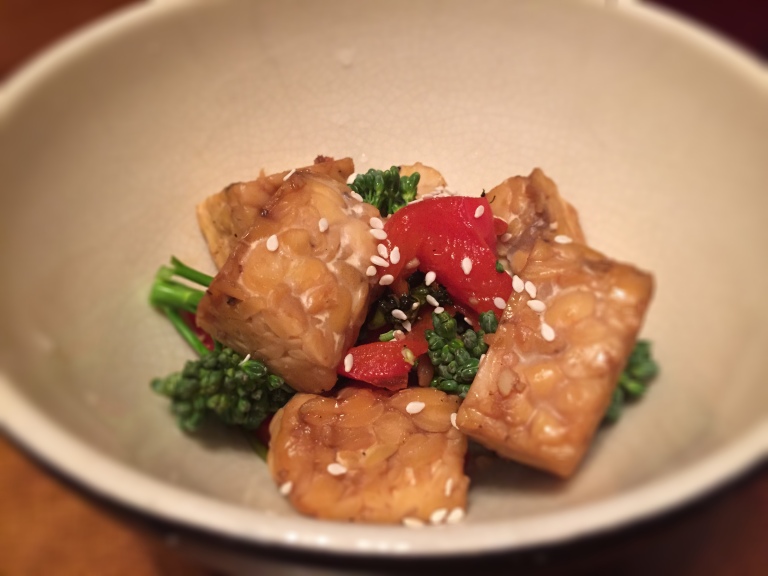 I was SO surprised at the flavor of this dish!!  It was super authentic and had such rich flavors to be so simple.  I found the original recipe on Saladmaster and just made a few adjustments.  I cooked everything together because of time (and because I don’t have a dishwasher!), but you might google for the original recipe to check out the original.

I kind of just made this one up!  A super simple sauté with some Asian flavors and BOOM – a super easy, light, tasty, beautiful, healthy dish!  Could I use more adjectives?  Probably, but I’ll spare you.  🙂